This article was published by Financial Express of 1 August 2010
http://www.financialexpress.com/news/agri-process-outsourcing-by-an-argentine-patel/654277/

During my meeting with Gustavo Grobocopatel, the founder President of the Argentine farming company Los Grobo which cultivates 270,000 hectares, I told him that I came from a small farming family which owned just an acre of land. Gustavo responded, ¨Lucky you…. I am a landless farmer ¨. He is right. He does not own a single hectare. It is all leased land.

Los Grobo does not own any tractor or harvester either. They outsource all the operations such as planting, fertiliser spraying, weeding, harvesting, storage and transportation to contractors who own the machineries. The firm has a system of technical leaders each of whom manage 7000 hectares. They are not employees but are partners who share the profit and risk. Even the agronomists who work with the company are contractors, who get a share of the crops they raise.

The 270, 000 hectares of land spread over Argentina, Brazil, Paraguay and Uruguay are managed by the headquarters staff of about 100 people who are connected in a network with the land owners, agronomists, the international traders and the 4000 service providers. Grobocopatel who believes in social capital says, ¨We are not big… but many¨

Here is Mr Patel working on the fields with his laptop... 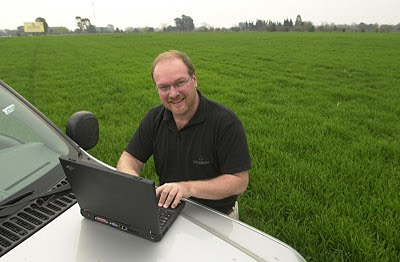 Grobocopatel´s Agriculture Process Outsourcing (APO) is similar to the BPO (Business Process Outsourcing) and Knowledge Process Outsourcing (KPO) operations of the Indian IT companies. Los Grobo office looks like a BPO of Infosys with young people in casual dress glued to their computer screens and working with their blackberries. The only difference with the Infosys office is that Los Grobo is located in a remote rural area in the middle of soya and wheat fields near Carlos Casares, a small village 300 km from Buenos Aires city....seen in the foto below... 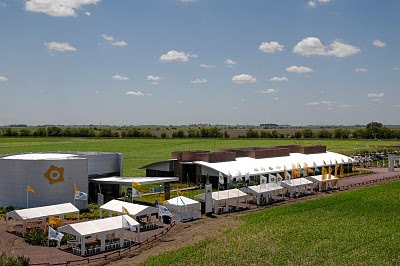 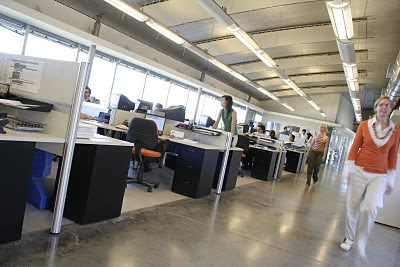 Grobocopatel says he was inspired by ¨Information Age¨, the book of the Spanish sociologist Manuel Castells which helped him to understand how networks could be used to generate wealth with the least investment. Grobocopatel describes his new model of farming as ¨Agribusiness in the new era of Knowledge Society¨. He points out at the young people behind the computers and says proudly that the human resources are the main asset of his company. Training and empowerment of the employees, the service providers and partners is an integral part of the value creation of the company. Los Grobo has arrangements with universities to give courses in agribusiness and management of small and medium family-owned companies at their headquarters in Carlos Casares. Los Grobo encourages its employees to become enterpreuners and even provides seed funding. Through its Rural Entrepreneurship Foundation, the company participates in projects to improve the standard of living in villages and small towns. Los Grobo, together with other partners, has created Bioceres, a biotechnology research and development organization.
Los Grobo farms scientifically by satellite mapping of every hectare of the land using a vast database of agricultural metrics. They do ¨Precision Farming¨ in which monitors are used to control input distribution of seeds and different fertilisers for each parcel of land on the basis of information generated by software calculating the dosage needed, depending on satellite location of the seeding and sprayer machines. The best practices of Los Grobo include ¨No-Till Farming ¨ (direct seeding) in which the crop residues are left to decompose and enrich the organic matter and maintain soil moisture. The land is always covered by straw and residues. There is no ploughing of the land and exposing it to sun and wind and erosion and degradation. This method improves physical and chemical soil structure, reduces carbon emission, cost of production and labour and increases productivity and helps in the conservation of soil.

The innovative business model of Los Grobo has been studied and commended by Harvard University, among others. Los Grobo has been sought out for consultancies by other countries. It is the first company worldwide to obtain ISO 9001 certification on grain production processes. It is establishing its APO business model in Brazil, Paraguay and Uruguay. Other Argentine farming companies are following the example of Los Grobo. This includes the company El Tejar which has emerged as the largest farming company in the world with cultivation of one million hectares this year. Such scale does not exist even in Brazil or USA. El Tejar´s goal is to reach two million hectares in the next five years. Out of the one million, 800,000 hectares are leased and 200,000 owned. El Tejar operates in Uruguay, Paraguay, Bolivia and Brazil where they cultivate 600,000 hectares. With such emerging global pioneering leaders in farming, best practices, advanced technologies and abundance of water and fertile land, Argentina is set to become a significant global player in the future when the world is going to be more concerned about food security.

I call Grobocopatel as ¨Senor Patel¨. He has no connection to Gujrat. He is of East European origin and his grandfather had emigrated to Argentina in 1912. Grobocopatel founded the company in 1984 and has achieved a turnover of 700 million dollars in 2009-10. His target is 1.5 billion dollars in the next five years. Grobocopatel is an agronomist and had taught the subject in the Buenos Aires University before becoming an enterpreneur. His agronomist wife is also a director in the company. For them, farming is not just business. It is passion. Grobocopatel has admiration for Indian culture and practises meditation and yoga. He is planning to visit India for a month in December. He has agreed to give talks in India on his new business model and also meet Indian companies interested in strategic partnership with his company.
South America offers opportunities for Indian companies to invest in farmland and source edible oil, pulses, sugar and biofuels needed in India for the growing population and consumption. The Indian investors do not need farming expertise or invest in machinery since they can outsource all the farming operations to local service providers. A Non-Resident Indian company Olam is at present cultivating 30,000 hectares in Argentina growing peanuts, soya and beans and are planning to double the acreage in the next three years. All of their land is leased and their operations outsourced. Simmarpal Singh is the young country manager behind this success of Olam. I told Grobocopatel that we have an Indian Singh following in the footsteps of the Argentine Patel.

Posted by viswanathan at 4:04 PM