The risk of doing business with Colombia is …falling in love….

The risk of visiting Colombia is that you might stay on… Says the Colombian tourism advertisement. But there is also another greater risk … The risk of ...falling in love...

This is what happened to three Indian IT guys Mohan, Atul and Kaushik who went to Colombia for an IT project. All three were captured, kidnapped ...and taken to the altar... The Indians were, of course, not innocent. They were willing victims.. and now lead happy married life with their Colombian wives.

The three went to Colombia as employees of an IT company. Soon, they quit their jobs and founded their own company Sophos Banking Solutions. They will not tell me which came first - love or entrepreneurship. It does not matter. They conquered the market but let themselves be conquered by the Colombian women.

Colombian women are among the most beautiful in Latin America. Those from Medellin and Calli are the prettiest in the region. When I was in Medellin in July this year, my eyes almost popped out while sitting in the outdoor cafes and bars. The streets of Medellin are like catwalks. The women walk ...parade ..as though they are models. It was like watching Fashion TV - a non-stop out door fashion show. It reminded me of the Brazilian composer Antonio Jobim and poet Vinicius de Moraes who used to sit in a bar in Rio de Janeiro and saw a girl passing by often. This inspired them to compose the famous song, ¨Garota de Ipanema- the girl from Ipanema¨. The bar is located near the Ipanema beach and known as the Garota de Ipanema bar.

The Colombian women are like the emeralds of the country- exquisite and sparkling. They are charming, sweet, elegant, graceful and intensely feminine. Besides their natural endowments, some get cosmetic surgeries done to enhance their attractiveness. Cosmetic surgery is a thriving business in Colombia.

Colombian women make good wives and parners with their committment, loyalty and sincerity. They are family oriented, affectionate and caring. I have a number of Indian and foreign friends who are married to Colombian women happily for many years with more mature love, as described in the song in the film ¨Love at the time of cholera¨ based on the novel of Gabriel Garcia Marquez.

There are loves that come to be resistant to years

Here is the song http://www.youtube.com/watch?v=uZ53MAEaoyQ

It was this book ¨Love at the time of cholera¨ which put a spell on me and got me passionate about Latin America for the last fifteen years. I was fascinated by the incurable romantic Florentino who is hopelssly in love with Fermina even when she rejects him and gets married to another. He waits for over fifty years with the same pure love and comes to propose to her at the age of seventy after the death of her husband.

Oops.. I got carried away…. I forgot to mention the fourth member of the Sophos team, Amitt. He is the exception. His parents seemed to have had knowledge of Colombia. They were not taken in by the title of the book ¨One hundred years of solitude¨ by Marquez. They knew it was just magical realism. They would not believe that there could be any solitude for bachelors in Colombia. So they made Amitt marry an Indian girl Vidushree before he could also fall a victim to the Colombian magic. She speaks fluent spanish and has become almost a Colombian.

Sophos provides IT solutions for banks and financial instituitions besides BPO and other services. They work with partners such as Infosys and Oracle. They have 90 Colombian and 12 Indian employees and are adding more.

I visited the Sophos office in Bogota. In the picture below you can see Amitt in the left and Mohan in the right with their Colombian staff, whom they describe proudly as their extended family. 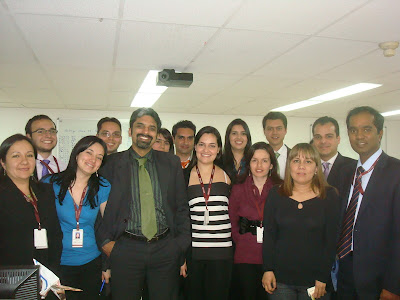 The office of Sophos is strategically located in the heart of the financial district of Bogota. They own the office and recently bought an adjacent space also as part of their expansion. The company is growing as the Colombian clients have gained more confidence in Sophos. Atul told me the secret…If he and a Colombian were to compete for a IT contract from a Colombian client, he as an Indian, had a better chance. Yes.. Indian name gives a competitive edge in the IT business in Colombia as in US.

Atul Malhotra is from Chandigarh, Mohanraj is from Coimbatore, Amitt is from Agra and Kaushal is from Mumbai. All the four guys work like Indians and have fun like the Colombians. They work typically an average of 13 hours a day. Every Sunday they have a video conference to review the past week and plan the next one. Guess what time.. At 0630 hrs. I am sure the video line will be absolutely clear and uncongested at this ungodly time when the whole of Colombia will be enjoying their Sunday morning sleep.

Atul who lives and works in Medellin is a connoisseur of the night life in Parque Lleras , where he took me out for an incredible evening. Mohan, who has the typical conservative and quiet Coimbatore smile was transformed completely into a Colombian Fiestero (party man) after a couple of aguardientes (local spirit) at the famous Andres DC Bar in the Zona Rosa of Bogota.

The Colombian wives have adapted well to their hard working husbands, confused in-laws and curious Indian relatives. They have learnt Indian cooking and know how to make their Indian husbands cry …with their hot Indian food.

I asked the Sophos guys about the experience of their Colombian employees. They are happy with the quality of Colombian human resources and their commitment. The Colombians are willing to work late in the evening or on a weekend whenever there is need. This has reconfirmed my own opinion that the Colombians have the best work culture in the Andean Community region and among the best in Latin America.

These days, Colombia is the hottest destination in Latin America for foreign investment with lots of opportunities and investor-friendly government policies. President Santos surprised the Indian Ambassador Warjri when he himself came forward to meet all the Indian participants in an Indian engineering exhibition last year. The Colombian embassy is the only Latin American mission in India to have an Investment Promotion Officer. The Colombian Ambassador in India Juan Alfredo Pinto is known for his proactive Economic Diplomacy with his background as an economist and entrepreneur. With the third largest population (48 million) in Latin America, Colombia is the third largest destination of Indian exports to the region. Reliance, ONGC, United Phosphorous Ltd, and Havells Sylvania are the major Indian investors in Colombia.

So here is a strategy for Indian companies to conquer the Colombian market. Send the bachelors in your export departments. They will have an extra motivation to establish long term exports and business of your company with Colombia.They will be inspired by Shakira's song ¨Sale el sol¨

One plus one is not always two

The sun starts shining , when one least expects

Here is the full song

Posted by viswanathan at 4:12 AM