Mangaloreans know very little about Mexico, on the other side of the world. But they know about a Mexican company, Cinepolis which has set up multiplexes in their town. Cinepolis has also set up multiplexes in other second tier cities such as Hubli, Amritsar, Pune, Ludhiana, Patna, Jaipur, Surat, Ahmedabad and Bhopal besides Bengaluru, Hyderabad, Gurgaon and Mumbai.

Cinepolis has emerged as one of the top four players and the only foreign company in the Indian multiplex market in the last six years. They have 84 screens and plan to add 60 more in 2014. Their target is 400 screens by 2017. With an average cost of 2.5 crores of rupees for setting up each screen, their total investment will be 1000 crores of rupees ( 150 million dollars). This would make Cinepolis as the second largest Latin American investor in India, after Gerdau of Brazil which has invested Rs 1820 crores. Cinepolis is introducing 4DX screen in their 14-screen multiplex in Thane. This will be the first in India to have 4DX technology, which gives the audience sensory experience such as mist, smoke and smell.

Cinepolis is the largest film exhibitor in Latin America and the fourth largest in the world with 3400 screens in eleven countries including USA. In their home market in Mexico they have 2700 screens.

Cinepolis is a pioneer in the concept of premium and luxury theaters. They are the largest operators of luxury theaters in the world.  Cinepolis operates only luxury cinemas in the US.

Cinepolis is one of the growing number of Mexican multinationals arriving at the global stage. Founded in 1947 by Enrique Ramirez Villlalon, the company has expanded aggressively after Alejandro Ramirez Magana, with MBA from Harvard, from the family took over as CEO in 1996. He introduced new technologies, innovation and professional management.

Ramirez, during his visit to India in the first half of March, reconfirmed the long term commitment of his company to Indiawhich is among the world's top five countries in terms of cinema-goers. He was confident on the potential of the Indian market to give ten percent of the global revenue of Cinepolis. Ramirez loves Indian films and his favourites include " Lunch Box" and “ Three Idiots".

The Indian operations of Cinepolis were started by Javier Sottomayer, who came to India in 2007. He has been living in Gurgaon and travelling around India searching for sites and talking to mall owners. He has developed a clear understanding of the traditional India, the modern mindset of the new Indian middle class, the complex regulatory system as well as the underworld of the property developers. He has learnt to adapt the Cinepolis business model to suit the Indian environment. He is upbeat about the prospects of the growth of the India and is betting on the new market of the younger generation of Indians. He attributes his Indian enlightenment to the book " Holy Cow; An Indian adventure" by Sarah Macdonald, an Australian. He sees many similarities between India and Mexico in the bureaucratic procedures, corruption and politics. He has learnt the Indian patience to deal with the long delays in the completion of the projects. As a Mexican, how does he find dealing with his Indian staff, numbering about a thousand? He says that the Indians are too respectful of the hierarchy. He is unable to get proper feedback from the people in the field since they do not feel comfortable in expressing their opinion freely to the boss. 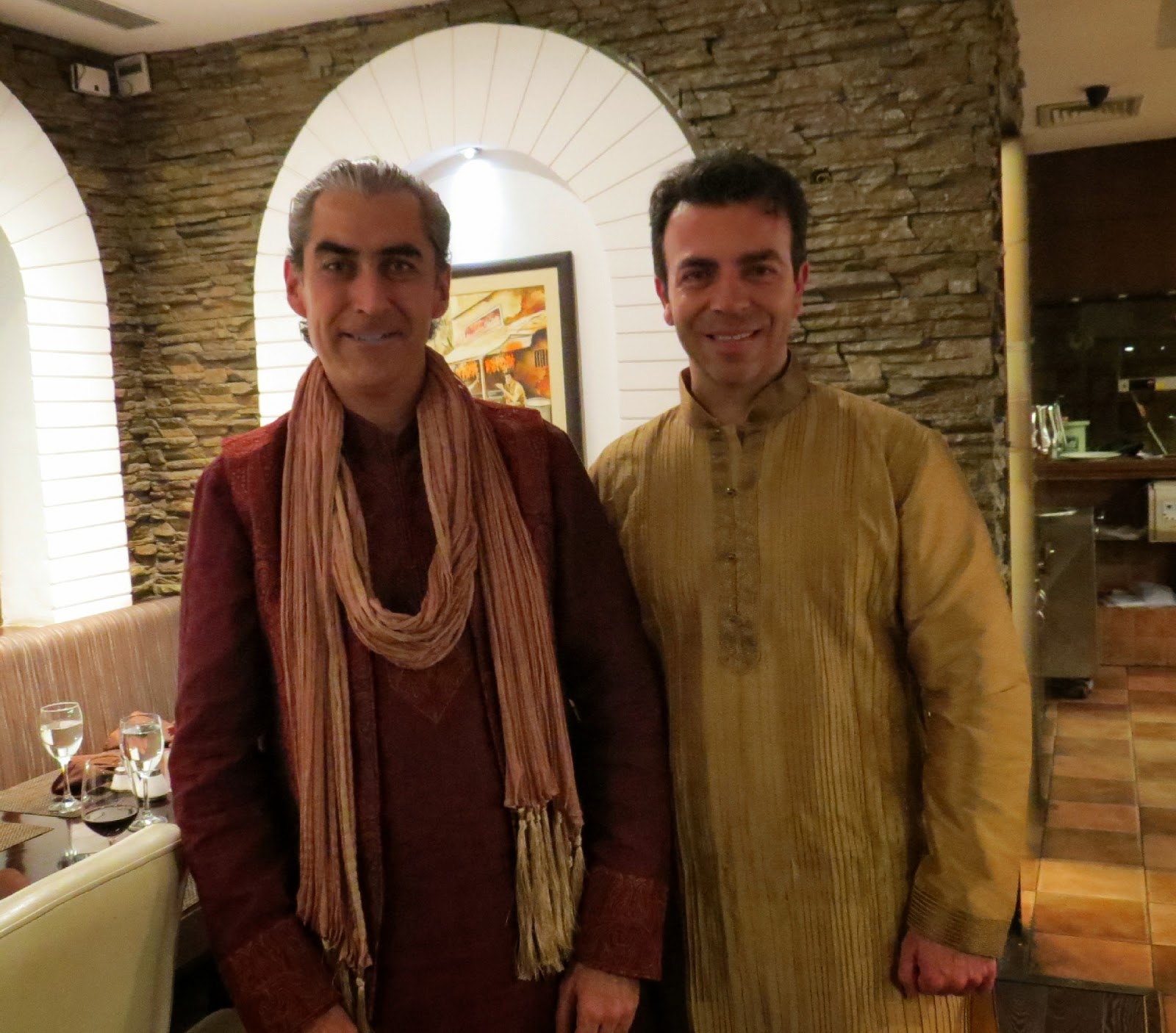 picture- Javier on the left and Ramirez on the right in Indian dress
Cinepolis is one of the eight Mexican companies which have invested in India. Most of the Mexican investors are in auto parts business. One of the recent investments is establishment of a childrens' theme park " Kidzania" in Mumbai by a Mexican company in collaboration with Shah Rukh Khan. On the other hand, there are over thirty Indian companies which have invested in Mexico in sectors such as IT, pharma and auto parts.

Mexico has another filmy connection to India. Barbara Mori, a Mexican actress had acted in a Bollywood film " Kites" as the heroin with Hrithik Roshan. Their pictures below. 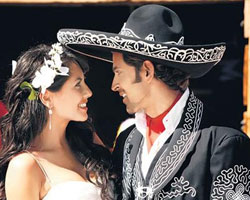 The Mexican film industry, which was the best in Latin America in the mid twentieth century, is in a renaissance boom these days. The film "No se acceptan devoluciones (Instructions not included- title in English version) " made record earnings of 87 million dollars, becoming the highest grossing Spanish language film in US. This follows the recent box-office hit of  " Nosotros los nobles". Mexican directors, actors and films have started winning global awards in recent times. Alfonso Cuaron, a Mexican won the Oscar award for best director in 2014 for the film " Gravity". Mexico is the fourth largest market of film-goers in the world. There is scope for exchange of films and soap operas between India and Mexico commercially. Both Indians and Mexicans have similar taste in food and films. They like them hot and spicy.
Posted by viswanathan at 9:51 PM