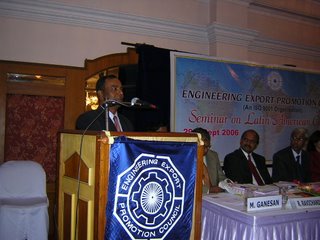 I was the key-note speaker in the seminar. I spoke about the change of mindset of bz and political leaders of India and latin america, which has opened up tremendous opportunities for trade and investments.
-The trade of 6.2 billion dollars in 2005 could be doubled in the next three years. The growth in the coming years is going to be quantum jumps and not just incremental.
-More than trade, the investment of indian cos in latin america have reached close to 3 billion dollars, with plans for additional investment of another billion in the next two years.
- Latest investment is by BEML in Rio de janeiro in a plant for production of railway wagons, mining and earth moving equipments. The 20 million dollar investment in the plant will make it a platform for exports to the other markets of latin america as well.
-Indian brands such as Reliance, Tata, Mahindra, Mittal, Essar, Jindal, bajaj, Thermax, Praj, Maruti are well established and recognised in the region, opening the doors for the entry of other Indian cos.
- Engg products are the leading items of export to mexico and central america, while chemicals and pharma are the main exports to Brazil and south America.
-The exporters should participate in sectoral fairs in sao paulo and mexico, as well as in ITPO fair in march 2007 in sao paulo.
-The exporters should have three distinct strategies for the three different markets of large ( brazil, mexico and argentina), medium size countries( colombia, chile etc) and small markets of central america and caribbean.
-Finally I gave an overview of the latin American market which is becoming stable and prosperous.
The Chilean Ambassador Jorge Heine, Miss Canela from Dominican Republic Embassy and Mr Alonso Gortari, Director General of Foreign Economic Relations of the Mexican foreign office gave presentations on their markets.
Eximbank and ECGC representatives gave details of their schemes for supporting exports to latin america.
Jibu mathew of UL India Ltd gave a useful presentation on the certifications and standards required in the latin american market. His contact: jibu.mathew@in.ul.com and www.ul-asia.com
Deepak Kumar of UTI worldwide spoke about logistics for trade with latin america. contact: dkumar@go2uti.com
I was surprised by the punctuality of the audience, despite the notorious bangaore trafic jams. The 100 plus exporters arrived and took seats well before the starting of the function at 10.45 am. Good bye to IST ( Indian Stretchable Time ) and welcome to the new business mindset, which values time !
During the function, Dr Ravichandran , secy- general of Indo-latin American chamber of commerce , Chennai presented to me a copy of his Ph.D thesis " Differentiated market strategies for business with latin america". He has generously acknowledged my "guidance, advice, inputs and support" for his research.
The seminar was held at Hotel Capitol, Bangalore by EEPC , southern regional office. Credit for the success of the event goes to Ganesan of EEPC Chennai.
Posted by viswanathan at 10:11 AM