The trade between India and Latin America was 15 billion dollars in 2009. India´s exports were 5.8 billion dollars and imports 9.2 billion.
Brazil remained as the top trading partner of India with 5.6 billion dollars, followed by Venezuela with 2.4 billion and Mexico 2.2 billion.

Below are the trade figures of 2009 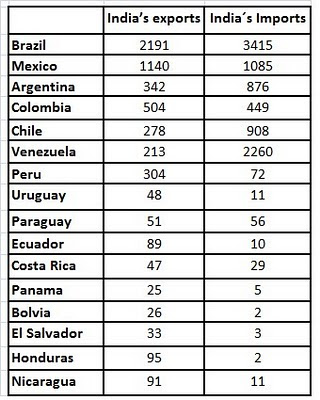 Chemicals, pharmaceuticals, engineering equipments, vehicles and autoparts, textiles and software were the main exports.
Crude oil, edible oil, sugar, copper and other minerals were the major imports of India in 2009. Major sources of imports of
crude oil -Venezuela
sugar- Brazil
edible oil- Argentina
copper- Chile
India´s trade with Latin America has decreased from 17 billion dollars in 2008. This was not unexpected in the light of the global crisis last year.
India´s exports have already resumed growth in the beginning of 2010 and the trade is expected to increase in 2010 and in the coming years.

Posted by viswanathan at 8:06 AM No comments: