Investment in the Lithium Triangle of South America

Lithium has emerged as important  for major countries and companies since it is one of the key inputs for the manufacture of lithium-ion batteries, which store the energy that powers mass-market electronic devices (such as telephones, tablets, laptop computers, wireless tools), automobiles and other electric vehicles, as well as electric power grids (when connected to wind turbines and photovoltaic cells). Demand for lithium is expected to  triple between 2017 and 2025.

The government of India, which also has a Lithium strategy, should take note of the ongoing foreign investment in the Lithium Triangle of Argentina, Chile and Bolivia, which has more than half of the world’s Lithium reserves. 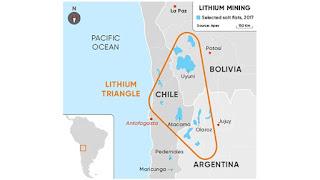 The Korean firm POSCO has announced its intention to invest US$ 450 million in a project to produce lithium at Salar del Hombre Muerto, where it acquired a deposit in 2018; and it estimates that production will start in 2021. Another major project was announced by France’s Eramet, the world’s largest producer of nickel and magnesium, which will invest US$ 380 billion in Salta for the production of lithium carbonate which should start production in 2020. The start of construction of South America’s first lithium battery factory was also announced, resulting from a partnership between the province of Jujuy and the Italian firm SERI. The factory, representing an estimated investment of US$ 60 million, will be managed by Jujuy Litio S.A., a joint venture between Jujuy Energía y Mineria Sociedad del Estado (JEMSE) (60%) and SERI (40%)

Although Bolivia has 9 million tons of Lithium reserves, (16% of the global total), the country still does not produce lithium. Recently it has signed two agreements for the industrial production of lithium. One of these is between the State enterprise Yacimientos de Litio Bolivianos (YLB) and the German ACI Systems Germany GmbH (Acisa), for an estimated investment of US$ 1.3 billion. In late 2018, a joint venture for the sustainable extraction and production of lithium hydroxide was set up in Salar de Uyuni, Potosí. In a second stage, it was agreed to form another joint venture to manufacture cathode and battery systems material in Bolivia and in Germany. Another agreement was signed with China, for the creation of a joint venture in 2019 to undertake lithium industrialization projects in the salt flats of Pastos Grandes (Potosí) and Coipasa (Oruro), with an expected investment of over US$ 2 billion. The Bolivian government has been inviting Indian government and companies to invest in their Lithium mines.

Posted by viswanathan at 4:21 AM No comments: 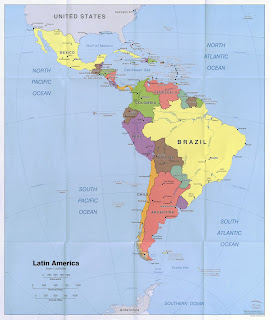 Posted by viswanathan at 10:41 PM No comments: