During my golf game at the Rio Cuarto Country Club on 16 May, the Argentine players asked me where they could buy a Turban and how to wear it. I asked them the reason for this special interest. They showed me a villa within the country club complex and said ¨Here lives an Indian Maharaja. He looks handsome with his Turban. When he goes to the night clubs , he gets premium service and gets it free because they think he is a Maharaja.¨ The Argentines wanted to wear Turbans and get the same special treatment at the night clubs.

The envy of the Argentines is Simmar Pal Singh, a Sikh from India. I clarified to the Argentines that Turbans do not mean Maharajas. They asked me to shut up and not to reveal this secret at the night clubs ! I told them that Simmar Pal is not a Maharaja by birth but has become a Peanut Prince of Argentina. 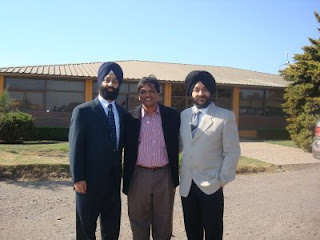 Here is Simmar Pal in dark suit on the left. In the middle is Nityanand, from Coimbatore, who is the manager of the peanut processing plant. On the right is Narinder Pal Singh, Olam manager in Brazil.

Simmar Pal Singh cultivates 12,000 hectares of peanut farms and another 5000 hectares of soya and corn in Rio Cuarto area in Cordoba province, about one thousand kms from Buenos Aires. His target is to take his company Olam among Argentina´s top three peanut players in the next few years. When he came to Argentina in 2005, his company was 28th in ranking in peanuts and he has already made it as sixth this year. Argentina is the second largest exporter of peanuts after China, accounting for 25% of the world trade in kernels. Rio Cuarto region produces high-quality peanuts with its ideal soil and agroclimatic conditions.

During the dinner at his home, Simmar Pal's wife Harpreet Kaur, an architect with an M.Tech from IIT Delhi, laughed when I told her about the Argentine interest in Turbans. She said that Simmar Pal might have gone to the night club to check the peanuts his company had supplied to the club to serve with the drinks. I believe her. Simmar Pal works sixteen hours a day and has no time for night clubs. This modest young man from Amritsar has fiery ambitions, exceptional talents and is motivated by his success in the last five years. Simmar Pal did his B.Sc Honours in Agriculture from Guru Nanak Dev University and Masters degree in Rural Management from IRMA, Anand. He has worked in Mozambique, Ivory Coast and Ghana before coming to Argentina. He speaks Spanish fluently and his wife and two children have adopted to the life in Rio Cuarto, a small city of 140,000 people.

Simmar Pal works for Olam, the 5.6 - billion dollar Non-Resident Indian company headquarterd in Singapore. It is a leading global supply chain manager of agricultural products and food ingredients. Their 9000 employees worldwide operate an integrated supply chain for 20 products in 60 countries. It is a global leader in many of these businesses including Cocoa, Coffee, Cashew, Sheanuts, Sesame, Rice, Cotton and Teak Wood. Olam has a turnover of 500 million dollars in Brazil and employs 930 Brazilians. In their operations in Colombia and Peru they have sixty employees. More info http://www.olamonline.com

Simmar Pal came to Argentina in 2005 for buying peanuts for the company. When he found that the farmers preferred to sell their products to established companies and were hesitant to deal with new buyers, he proposed to his company that they should go into farming themselves. This was something new for the company which had been operating only in the field of trading and processing. Seeing the fire in Simmarpal´s belly and shine in his eyes, they wanted to give him a chance. He started off with leasing of 700 hectares of land and grew peanuts. It was a sucess. The company let him lease additional acreage. This year he has cultivated 17000 hectares including 2000 hectares in the province of salta about 700 kms away from Rio Cuarto. He has plans to continue the increase in acreage and grow other crops such as wheat, soya and pulses. Some of these and especially pulses could be exported to India.

Picture below is Peanut harvesting by the machine in Simmar Pal´s farm: 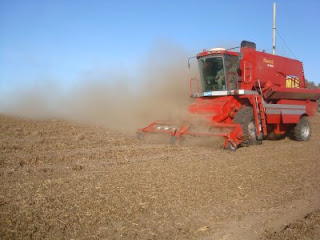 Olam has acquired two peanut processing plants. When I went to visit one of the plants, the mayor of the village Dalmacio Velez, of 2000 people, was there. He made a speech expressing his happiness with Olam which has turned around the factory and has given jobs to his village people.

Simmar Pal employs 140 Argentines, most of them in the processing plants. In the farm, he has very few people since the farming in Argentina is mechanised and everything is outsourced. Simmarpal contracts other companies for seeding, spraying of pesticides, harvesting etc. I did not mention ploughing because, in Argentina they dont plough the land anymore. They practise what is called as Direct Seeding ( siembre directa) which means they dont prepare the land with ploughing after the previous harvest. They let the residues from the previous harvest to rot and become manure. Seeding is done with a special machine which puts the seed inside the earth along with fertilisers without opening the earth around the seed.The land retains its moisture and organic materials. This is environment-friendly and sustainable agriculture.

The farming in Argentina is done in large scale, technology-driven and is globally competetive. It is done commercially, scientifically and professionally. The farmers consider 2000 hectares as the minimum land holding necessary to do cultivation on their own. When they have less, or when they dont want to dirty their hands, they rent out their land to companies and individuals who do professional cultivation in large scale. Seventy percent of the cultivation in Argentina is on rented land. Simmarpal paid last year 700 dollars per hectare. He has rented the 17000 hectares from 40 owners with holdings ranging from 40 hectares to 3000 hectares.

An Argentine company called as Los Grobo Group cultivates over 200,000 hectares with its professional management. I told the owner of this company, who has got his own aircraft, that the secret of his success is his previous incarnation in Gujarat. His name is Grobocopatel.... Patel is the last part of his name and the gene behind his entrepreunerial talent! No wonder, he is a follower of Saibaba and practises meditation and yoga.

Simmar Pal employs four agronomists and pays them 45,000 dollars each per year. He uses the consultancy services of four more agronomists. The Argentine agronomists get as much salary and prestige as the software specialists. Last week, I visited the farm of a friend Francisco Okecki in Buenos Aires. He is an agronomist who manages 20,000 hectares including 1000 hecatres which belong to him. He is so passionate about agriculture as much as as I am about Latin America.

What Simmar Pal Singh is doing in Argentina has a lesson for India, which is going to face in the long term shortage of agricultural land and water for irrigation for its population which is increasing by 15 million per year and a population equal to Argentina every 32 months ! But Argentina, which has almost the same area as that of India has a small population of 4o million and plenty of land and water. Argentina is an agricultural power house. It exports 50% of its agriproduction of 100 million tons. It is the world’s largest exporter of soy oil and sunflower oil, the second largest exporter of corn, third largest producer of beef , soyabeans and biodiesel and fourth largest of wheat. Argentina is the fifth largest producer of wine in the world. It has significant potential to increase its area under cultivation ( from the mere 32 million hectares at present, in contrast to India´s 130 million hectares ) and production.

In India, we have irrigation canals, dams, ground water pumps and issues of water table going down and free electricity for farmers. Argentines are free from these issues since their agriculture is almost entirely rain-fed. There is irrigation only for a few specialist farms and some vineyards. Indra, the Rain God takes care of the rest !

Argentina has developed an efficient infrastructure, logistics and network for transportation and shipping. The food processing industries of Argentina are one of the most advanced in the world and globally competitive. For example, the oil crushing capacity of Argentina is the third highest in the world- even ahead of Brazil- with the latest technology and plants.

The Argentines have innovated a new system of storage of grains in open air instead of expensive concrete and steel silos. They have developed polythene silobags which can store 200-400 tons on the field itself. The grains are pumped into the bag by a machine and can be stored for upto 15 months. The bag is ripped open at the time of transfer to the trucks. The Argentines have exported this new technology and bags to a number of countries and want to export to India too. Cost of this new type of storage is four dollars per ton.

Argentina could be a longterm source of supply of grains, oil seeds and pulses to India. Already India is importing from Argentina soya and sunflower oil for about 700 million dollars a year. There are occasional imports of wheat.

The Indians could go beyond imports and invest in Agribusiness in Argentina. There is no restriction on foreign investment in agriculture in Argentina. A number of foreign companies and individuals own land here. Cost of the most productive land is 15,000 dollars, which, I am told is cheaper than in Punjab. The Argentine yield per hectare is about three times higher than that of India in soya, peanuts and some other crops. The Solvent Extractors Association of India has formed a Consortium of companies interested in investment in agribusiness in South America.

I hope the Indian enterpreneurs will come to invest in Argentina, inspired by the successful example of Peanut Prince.... Simmar Pal Singh !

They should not forget the Turbans...

Posted by viswanathan at 7:30 AM

Great Inspiration post for all indian investors looking for investment in Argentina's Agribusiness.
Thank U Hon'ble Sir for bringing such inspiration success stories to our knowledge.

Hi It is good to know that people from India are looking at us with such interest. I happened to live in London for some years and made good friends with a couple of guys from India, who I found very similar to us in their every day habits, and much more interesting in their religious and emotional lives. I am now a follower of Sri Sri Ravi Shankar and am planning to visit India soon, to know more about you. I happen to work for a company managing large areas of land in Argentina, so will be a pleasure to keep in touch with you and share ideas about business, life and common interests. This article was great. I am also a peanuts trader with this company (amongst other products) and will find out more about this person you mention. Thanks.

Great success story. Very inspiring on the opportunities that this land offers to serious initiatives. I live in BA and am part of a NY based investment bank that specializes in articulating international funding for initiatives like these and/or helping to find partners and structure partnering options. We have not come across projects from Indian companies but would love to help if there are needs.

The pictures are really good and also about the Simmar Pal Singh is good to read,information is quite great.

Salute to you for introducing such a personality & salute to S.Simmar Pal Singh Ji for being Saabat Surat in a profession which people take it as an excuse for trimming their KESH beard.
Sikh's must please learn lesson from living personlit.