Singh is King ....in Argentina

I wrote a blog in 2009 describing Simmarpal Singh as the Peanut Prince of Argentina.
http://businesswithlatinamerica.blogspot.com/2009/05/simmarpal-singh-peanut-prince-in.html#links)
The prince has now become a king. He has a kingdom of 20,000 hectares of peanut farms. He is growing soya and corn in 10,000 hectares. He is now into rice. This year he has leased 1700 hectares of land in Concordia in the Entre Rios province for rice cultivation. His target for farming in Argentina is atleast 100,000 hectares.... 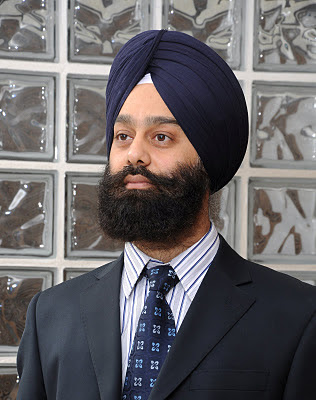 I visited his rice farms on Thursday 3 November with him. I saw the process of planting of rice. As in the case of other crops, the Argentines use the No-Till method, also called as Direct Seeding. The seeds are directly planted in the land with the direct seeding machines. The fertiliser containing nitrogen, potassium and phosphorous is also added into the same hole where rice is put. They do not follow the Indian practice of ploughing the land nor the method of developing a nursery first and then transplanting the rice plant. They spray glyphosate herbicide to kill the weeds before planting rice. The spraying is done from an aircraft. They prepare a kind of embankment after every three metres to hold the water evenly in the parcel of the land which comes in very large pieces. They use a special equipment for making the embankment of mudwalls. Then they start watering the rice field with ground water pumped by a motor. The water pump works almost non-stop for 90 days till the rice seeds ripen. They have water pumps for every 70 hectares and there is a person to take care of the watering for every 140 hectares.
But the watering of the fields is expensive, costing almost 500 dollars per hectare due to the high cost of diesel. There is a proposal to electrify the motors with a World Bank loan. When this is done the cost will come down. At present the total cost of rice cultivation is 1800 dollars per hectare.
After the harvest, the paddy is dried and stored in the huge silos of a rice mill. The paddy is milled into rice and packed in 100 kilo bags for exports.
Coming from a small farming family, the Argentine cutivation appeared to me more like a civil engineering project with heavy machines, huge land parcel and high cost.
Here is a field with 25-days old rice plants 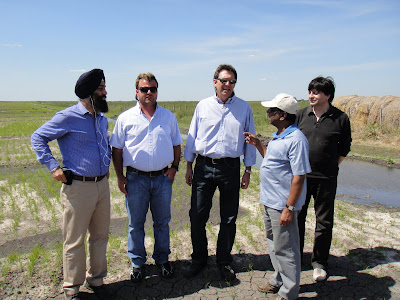 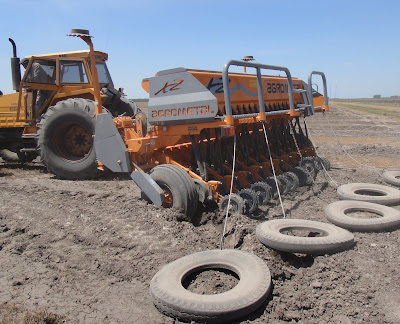 The Argentine yield per hectare is 7 tons, which is double that of India. Argentina produces about 1.5 million tons of rice of which one million is exported. Simmarpal's objective is to export the rice. His company Olam ( based out of Singapore and run by persons of Indian origin ) is one of the major rice traders of the world.
Simmarpal has now gained sufficient expertise and confidence in farming in Argentina. His company Olam has recognised this and is encouraging him to go for more acreage and scale up the operations.
Simmar's and Olam's ambition coincides with those of the Entre Rios government which wants to increase the rice acreage and production. The government sees value addition to the province by Olam which contributes to production,exports, employment and human resource development. The Entre Rios province has large uncultivated tracts of fertile land with plenty of water since the province is located between the large Parana river on one side and the Uruguay river on the other side. Besides rice, there is cultivation of blueberries, soya, wheat, citric fruits and even eucalyptus plantations in the province.
I discovered one of the secrets of success of Simmarpal but at a high cost to my comfort. He made me leave Buenos Aires by car at 6 am in order to reach Concordia by 1030 am and join a conference call with his colleagues at 11 am. He inflicted the same pain on return too. We left Concordia at 6 am to enable him to attend a meeting at 11 am in Buenos Aires. I wanted a short break after the long four hour journey but he did not need and plunged straight into work.
Simmar had himself driven 36,000 kms during his first six months of his arrival in 2005 in Argentina to look for farms, recruit people and supervise the operations. Now with the luxury of a chauffeur-driven vehicle, he works in his blackberry, iPad and laptop non-stop.
I was impressed by this Indian-style hard work and also the pleasant Latino way in which he manages his Argentine employees. He has cultivated commendable rapport with the Argentines in the same efficient way with which he cultivates the land. The Argentines admire this young Indian's dynamism and adore his turban, thinking that he is a Maharaja.
Posted by viswanathan at 3:36 PM