This book, launched on 24 October 2013 in New Delhi, is the first by a Latin American author on India- Latin America relations in modern times. Dr Soraya Caro, the author has lived in India as the spouse of the Colombian ambassador Juan Alfredo Pinto for the last six years. She did a PhD on the same subject as the title of the book in the Indira Gandhi National Open University in which she is the first foreigner to get a doctorate. She, her husband and daughter Valentina ( she did six years of schooling in Sanskriti School in Delhi and speaks Hindi fluently) have a deep affection for India. Soraya says in the preface of the book," My life and the life of my family have been dramatically divided into two by destiny: before and after the period we lived in India". Soraya's book is, therefore, an expression of her heart as well as her mind. 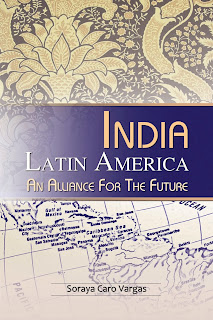 The book brings together views from four different worlds: the academic world in their ivory towers; the business world which is discovering more and more opportunities for trade and investment; the diplomatic world of  "cheers" and "your excellencies"; and the world of the masses inhabiting both regions in poverty and with lot of other developmental problems. Soraya has seen the relations through these four distinct worlds and has distilled her views based on her extensive interactions with people at all levels in both parts of the world.

Soraya has found the perceptions of many of the Indian academics on Latin America as distorted and outdated. Most Indian academics specialising in Latin America are of the Cuban revolution vintage who see and interpret the region through the prism of revolution and anti-imperialism in a spirit of romanticism. These cheer leaders of Castro and Chavez go overboard in celebrating the leftist rhetorics and achievements and do not pay adequate attention to the larger picture and the new trends of the region. Soraya gives the example of a seminar on Chile in New Delhi in September 2010 when the Indian academics kept on talking about the Pinochet era causing embarrassment for the Chileans and forgetting the fact that Chile is today a vibrant democracy, the best economy and a role model for others in Latin America. There is a similar situation on the other side too. Many Latin American academics are scholars of Sanskrit and India's ancient wisdom. There are very few who study contemporary India's political and economic developments. These archaic academic approaches on both sides complicate the perceptions of the public who have very little knowledge about each other.  Soraya has clarified some of the misconceptions of Indian academics about Latin America such as identity, racial mix and explained the developmental history of the region and also given a balanced account of India ( negatives and positives) to the Latin Americans.

Soraya is critical of the current model of trade between India and Latin America in which the latter is the provider of raw materials ( crude oil, edible oil and minerals- these three account for three fourth of exports to India) while India exports diverse finished and semi-finished goods. She calls for more value added exports from Latin America and a balanced and diversified trade and not just a simple transaction of natural resources. While I fully agree with her, my point is that India cannot do much about it. It is for Latin America to move up in the value chain and export processed and finished products instead of raw materials.  Chile can certainly export copper wire and products instead of sending mountains of copper concentrate to India.  Even Mexico which stands out in the region as an exporter of manufactured products (cars, electronics and aerospace equipments) exported 2.8 billion dollars of crude oil out of its total exports of 3.3 billion to India in 2012. It is ironic that Mexico which is one of the top exporters of crude oil, imports a large part of its refined products. The chief of Shell in Mexico told me that Mexico has no plans to expand its refining capacity in the near future. On the other hand, there is a positive trend of adding value to raw materials in some countries. For example, Argentina exports value added Soy oil to India ( although both Argentina and Brazil export unprocessed soy beans to China). Bolivia is sitting on rich deposits of Lithium needed more and more for batteries in all kinds of gadgets. But President Evo Morales has refused to allow extraction of the mineral for exports as a raw material. He insists that he will allow investment in Lithium mines only if the companies make finished products within Bolivia itself. The Brazilian government is pressurizing Vale to make steel in the country rather than exporting millions of tons of  iron ore to China whose companies export steel products to Brazil at a price lower than the Brazilian steel. So there is no point in complaining that India looks at Latin America primarily as a source of raw materials. It is up to the Latin Americans to change their paradigm as raw material providers. In any case, there is a great deal of complementarities and synergies between the resource-rich Latin America and the resource-deficient India. Latin America has surplus to contribute to India's energy and food security.
Soraya has given detailed information on the investment by Indian companies in Latin America and vice versa. She has analyzed the problems and challenges faced by some of the Latin American companies in their investment in India, caused by inadequate political, social and cultural understanding. She has advised her own country's business groups to pay attention to the markets of India and Asia as Chile and Peru have done so successfully. She has highlighted the tariff and other barriers of India for imports of some Latin American products such as Colombian Coffee and wines from Chile and Argentina.
Soraya cautions the Latin Americans that India cannot be viewed just through statistics and secondary sources. She says that the data has to be seen in the background of India's long tradition and culture of the intricate and complex Indian society to get a real understanding. Oliver Stuenkel, the Brazilian expert on India also has the same opinion and says that the conventional western analytical tools to study the rise of powers cannot be employed for India, which is a unique case. While highlighting the new consumerism in India, Soraya says, " India is big enough to assimilate all kinds of external influences, but in its essence India does not change". True.


Soraya has gone through the recent studies on India-Latin America economic relations done by Inter American Development Bank as well as the UN Economic Commission for Latin America and Caribbean ( the ECLAC report was launched in the seminar I had organized in Buenos Aires in December 2011 on " The New India and the New Latin America: synergies and complementarities") and found them incomplete. They were done by researchers based on statistical information, without full understanding of the dynamics which move the societies and business leaders of the two sides. I have read both the reports and found them as rather "theoretical and abstract". But I agree with Soraya that these two studies by IADB and ECLAC have helped in raising the profile of India in the region and stimulating greater interest among Latin American business and political leaders in India.


Soraya has made some comparisons between Indian and Latin American developmental experience. She has pointed out a number of areas for mutual learning and sharing of best practices in  economic liberalization, infrastructure building, mining, railways, renewable energy and IT.


She has touched a sensitive nerve of the Indian External Affairs Ministry in calling for SAARC (South Asian Association for Regional Cooperation) to be open to new inter-regional interactions and for giving observer status to Pacific Alliance. She could say this boldly since Colombia is lucky not to be blessed with the kind of neighbors India has !

In the last chapter " Steps to come closer", Soraya has given a number of practical suggestions to bridge the information and communication gap and for improvement in mutual understanding. She has called for direct exchange of information and knowledge and interaction between the two sides instead of using European and American books, articles and interpretations of Latin America which are obviously biased reflecting their own agendas and prejudices. This means that Indians should read Latin American books and media in Spanish and Portuguese. It is encouraging to see that Spanish has become the most popular foreign language in India replacing French. Soraya has exhorted the Indian academia to move from shallow generalizations of Latin America to systematic and specialized studies at national and subregional levels. She has called for specific analysis of areas such as public policies, rural development, social inclusion and democratic citizenry participation. She has called on the governments and the corporates to provide financial support for studies and interactions. She has advocated pursuit of more joint projects in science and technology, infrastructure, food security, and biodiversity. 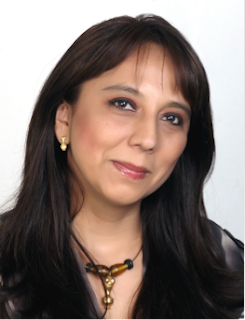 Soraya is in the best position to implement some of the ideas she has suggested in the book. She has become the Director of the Centre of Studies and Services on Contemporary India and Southern Asia (CESICAM) at the University of Externado of Colombia in Bogota. She was the one who initiated the project to set up this Centre. She has already established many contacts with Indian academics and think tanks and is also connected to a number of Latin American scholars and institutions. She is planning to organize events and joint research to promote India in Latin America and vice versa.

As the name itself indicates CESICAM will not merely promote and produce academic exchanges and scholarly research. It will also provide consultancy services to companies and governments. Soraya herself has provided consultancy services to Colombian government and industrial organizations as well as foreign agencies. Her background as a lawyer and economist add to her academic profile.

CESICAM is the first centre for study of contemporary India in Latin America (Recently the Rio de Janeiro State University has also set up a centre for Indian studies). All the other centers in the region call themselves as the Centres for Study of Asia and Africa in which China, Japan and Korea dominate. For example, the Centre for Asian and African Studies in the National University of Guadalara in Mexico has so many exchange programmes with Korea, Japan and China but nothing with India. There are about 50 Korean students, 15 Japanese and a growing number of Chinese studying in the University but none from India. The Director of the centre, like his counterparts in other universities in Latin America, is keen to establish tie ups with Indian Universities for collaboration and exchanges.

Soraya is the third Latin American to write on India with direct experience after having personally lived in India. The first one was by the Mexican writer Octavio Paz who wrote " Vislumbres de la India"( in the light of India) after having done two diplomatic postings in India. The second was by Jorge Heine whose book " La Nueva India" published in December 2012, based on his stay during the "India Shining" period 2003-7 as Ambassador of Chile. While Octavio Paz's work is more literary and philosophical, Jorge Heine and Soraya have taken contemporary India to a larger Latin American audience of business leaders and policy and opinion makers.


Soraya and her "passionate about India" ambassador- husband are saying Adios to India and are moving back to Colombia in November 2013. India will miss this intellectual and literary power couple. But we could count on them to be like Honorary Ambassadors of India in Colombia and Latin America.

Posted by viswanathan at 8:35 PM