During the India- Latin America Business Seminar in Buenos Aires on 2 July, when it was announced that a Senior Vice President of Tata Consultancy Services ( TCS) in charge of Latin America, Spain, Portugal, Middle East, Africa and East Europe, would make a presentation, the audience expected to see a Chandrashekar or Srinivasan. They were surprised and puzzled when Gabriel Rozman, a Uruguyan came on the stage. The Argentine dignitary sitting on the stage next to me shrugged his shoulders,raised his eyebrows and looked at me. I told him Gabriel Rozman is a Uruguyan of Hungarian origin, holding a US passport. Most of the time he is up in the sky in planes crisscrossing the oceans. Even when he is next to you, he is constantly fiddling with his Blackberry. He has houses in Punta de Leste, Buenos Aires and NewYork and may be he is buying one in Mumbai. 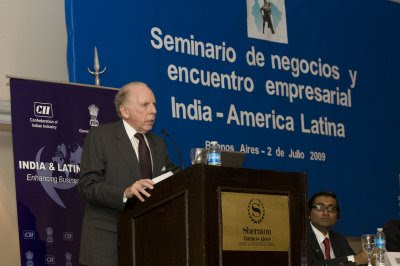 Picture above: Rozman speaking at the Seminar.

It is not only the audience in Argentina who are puzzled by the unexpected Rozman-TCS combination. Clients in Latin America, US, Europe and the emerging markets are also taken aback when Rozman markets TCS services to them. He reels off the history and reputation of TCS and Tata Group with passion and pride. His opening line is ¨somos el grupo mas importante de la India - We are the most important group of India¨. Rozman is a regular speaker on India and IT at the international and regional business conferences in Latin America.

Rozman joined TCS in 2001 and started the company´s operations in Uruguay in 2002 with 15 staff. Today the company employs 800 Uruguyans and plans to expand and double the strength in the next few years. The Uruguay Center of TCS provides offshore IT services to US, Europe and Latin America. Being a small country, Uruguyan IT human resources are obviously limited. To meet this challenge, TCS has started a Regional Training Center in Montevideo for Uruguyans and Latin Americans. This has already trained over 500 professionals and the target is 3000 within the next two years.

When Rozman proposed to TCS that Montevideo would be the launching pad for Latin America, the bosses in Mumbai were skeptical. They knew Brazil, Argentina and Mexico. But Uruguay.... hmm... such a small country with a tiny amount of human resources and unviable local market ! To answer these questions and convince the company, Gabriel arranged the visit of Ratan Tata, the Chairman of the Tata Group to Uruguay in January 2004. Tata had readily agreed after seeing the business climate of Uruguay and the seriousness of the Uruguyans. 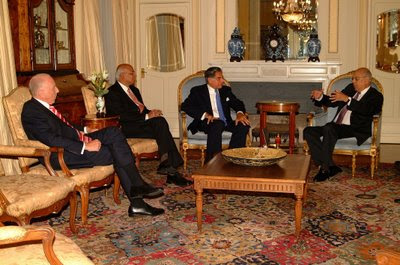 Picture above: from left to right, Rozman, Ramadorai CEO of TCS, Rattan Tata and Battle President of Uruguay.
To my knowledege, this was the first ever business visit of Ratan Tata to Latin America. It was after this visit that the Tata group has started taking Latin America seriously.

From Uruguay, Rozman expanded the TCS operations to Brazil, Argentina, Mexico, Ecuador, Colombia and Chile through the organic as well as the inorganic route. Rozman managed to get President Felipe Calderon himself to inagurate the Mexican centre of TCS in 2007. Rozman got two large contracts of more than 150 million dollars each from Banco Pichincha in Ecuador and the Mexican pension fund system. Six percent of the global revenue of TCS comes from Latin America.
Currently, TCS employs around 6000 Latin Americans including 2000 Chileans, 1700 Brazilians, 1000 Mexicans, , 800 Uruguayans, 150 Argentines and a few hundred Ecuadorians and Colombians. Latin Americans form 48% of the non-Indian staff of TCS, whose total strength is close to 100,000.
Rozman´s conquest of Latin America lead to his promotion in January 2008 from Head of Iberoamerica to the next level of Executive Vice President for Emerging Markets. As part of TCS’ Executive Leadership team, he is responsible for leading the company’s strategy to enter new markets and other strategic corporate initiatives.

Rozman is undoubtedly the secret behind the success of TCS in Latin America. I remember when I was Consul General in Sao Paulo, TCS was struggling to enter Latin America through Brazil. The Indian representative of TCS who was working on the Latin America entry strategy in SaoPaulo was frustrated that despite the impeccable reputation and competitive pricing the Latin Americans did not take TCS seriously. The Latin American clients were willing to pay more to North American IT companies who would in turn outsource the job to India. It was Rozman, with his multicultural skills, who changed their mindset and made them feel confident and comfortable in dealing directly with Indian IT companies. Rozman´s Latino charm, understanding of Indian culture and American style of aggressive marketing paid off. It was only after his success in opening Latin America for TCS that other Indian IT companies including Infosys, WIPRO have started entering this region. But the business of other Indian IT companies is a very small fraction of the turnover of TCS in the region even now.
Rozman has used diplomacy too. He has succeeded in convincing Ramadorai, the CEO of TCS to become the Honorary Consul of Uruguay in Mumbai. I guess the patriotism of Rozman is also behind the success of a Uruguyan architect Carlos Ott who got a contract to build the 250 million dollar IT complex of TCS in Chennai. It will be one of the largest IT complexes in the world with 30,000 staff .
The TCS success in Latin America has pioneered a new 12/ 12 business model for Indian IT companies for delivery of offshore services to North American clients. Twelve hours of service from Latin America ( the same time zone as that of North America) and twelve hours from India. This is better than the 24/7 model in which Indians dont get time to sleep. In the 12/12 model. the Indians get time to sleep while the Latin Americans work !
The second advantage is the multilingual skills of the Latin Americans. They are proficient in Spanish, Portuguese,Italian, French and German since their grandparents or great parents came from Europe. Of course, many graduates speak English. One should also remember that USA has about 50 million Hispanics who have become the largest minority there and Latin America is a base from which to reach out to the US Hispanic market.
Latin America, like India, has lot of young people. They are better tuned to American and European culture, fashion and mindset than the Indians. They are also creative, imaginative and free-spirited. These traits are especially useful for design and creative work.
Gabriel Rozman-TCS success is an example of the emerging strategic win-win partnership between India and Latin America in the IT sector. I hope this will be an inspiration for more Latino Rozmans and Indian companies.
Posted by viswanathan at 9:41 AM

Sir,
I am a regular visitor of your blog. Please let me know if I can get a chance to talk to you sir?
Thanks
Veerappan. PL
Chennai