¨Hermano… Yo tambien soy Indio ¨– Brother ...I am also an Indian. This is how President Evo Morales greeted Naveen Jindal, Managing Director of Jindal Group when they met first time in 2006. Naveen responded ¨Your Excellency , We from India believe in Karma. It is the Karma which has brought together the brothers from India and Bolivia ¨. Evo asked, ¨ how long are you here?¨. Naveen replied, ¨for the next seven reincarnations¨. Evo burst out laughing and gave a 40 year lease of the El Mutun iron ore mine which has one of the largest reserves in the world with an estimated 40 billion tons.

The Jindal investment of 2.1 billion dollars is significant for Bolivia whose GDP is just 18 billion dollars and population 10 million. It is the biggest investment Bolivia has ever received. The steel plant to be set up by Jindal is the first- ever in the country. The Jindal Project will contribute to the industry, economy and export earnings of Bolivia besides to the exchequer by way of taxes and royalty. They will provide jobs and training to thousands of Bolivians. It is, therefore, no surprise that Jindal steel is the talk of the town all over Bolivia from El Mutun where the mine is located to Santa Cruz the provincial capital and to La Paz the capital of Bolivia. At the Santa Cruz airport, you can just tell the taxi driver to take you to Jindal office and need not worry about the address. They all know it. The only thing is you have to say Hindal since J is pronounced as H in Spanish.

The Jindal investment is not just another project. It is a civilisational encounter between the millenial India and the ancient native Indians of Bolivia. Evo Morales is the first native Indian to be elected as president of Bolivia which has sixty percent Indians in the total population. In fact, he is the first native Indian President to be elected in Latin America. This historic empowerment is a celebration for the 40 million indigenous Indians of Latin America spread from Chile to Mexico.

The indigenous population of Bolivia and the region were also called (mistakenly) as Indians by the Spanish colonisers. Besides being called as Indians, the people of India and Bolivia have many similiarities. Many gods and goddesses bless the indigenous people of Bolivia as in India. Evo went to thank the native God in the mountains and had a special religious ceremony before assuming office like the Indian politicians go to Tirupati temple. The indigenous communities of Bolivia offer Coca leaves as part of the worship to their gods and also chew coca leaves as people do in south India with betel leaves. The Bolivians garland their VIPs just as the Tamils do. Bolivia has many indigenous groups speaking different languages. Evo belongs to the Aymara group which he calls as Aymara nation. He has even changed the official name of the country as Estado Plurinacional de Bolivia – Plurinational State of Bolivia. It is in the context of these common rich traditions that the Mutun project assumes importance as a historic link between the civilisations of India and Bolivia.

Here are the brothers Evo Morales and Naveen Jindal in the picture below: 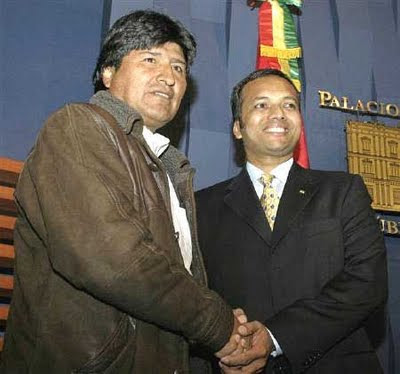 The Jindal project has the following components:

-production of 25 million tons of iron ore a year

-a pellet plant with capacity of 10 m tons

Part of the production of iron ore and steel will be exported. To start with, iron ore will be exported in the next few months. The ore will be transported by trucks to Puerto Busch 100 km away from El Mutun. From there, barges will be used on the Paraguay-Parana rivers for about 1800 kms to an Argentine river port near Rosario. Each barge will carry 2500 tons and 16 barges will go together in a convoy. From the Argentine port there will be transshipment on ships with capacity of around 45,000 tons. These ships will go through the river for another 400 kms through Buenos Aires to reach the Atlantic ocean and then on to China and other countries. The steel to be produced will be supplied mostly to the domestic market as well as to the neighbouring countries.

Vikrant Gujral, President of Jindal Bolivia is the one who manages the project. He is a veteran with 48 years in the steel industry. He rose from a management trainee of the Indian Iron and Steel Company (IISCO) in 1963 to become the Chairman of IISCO as well as Managing Director of Bhilai steel plant and a senior director in SAIL. He is passionate about steel and motivates and entertains his team with stories and anecdotes over Argentine and Chilean wines at the dinner table. He has a team of about 20 hard working and innovative Indian engineers and experts who interact with the Bolivians enthusiastically in their broken Spanish. They have spanish classes in the evenings. The Bolivians working in the project greet the Indians with Namaste and keep saying Achha hai. They enjoy the chappatis, basmati rice, dals and even the pickles at the Jindal guest house.

Gujral has found out another cultural similiarity of Bolivia with India but an uncomfortable one. Bolivians queue up in front of his offices in Puerto Suarez and Santa Cruz for jobs and contracts. He receives numerous calls from political leaders seeking favours. He has delegated this job of dealing with political leaders to his Director Arvind Sharma who flies the Indian flag as the Honorary Consul of India in Santa Cruz. He is a permanent resident of Santa Cruz since 1990 and is more Bolivian than many natives.Both are conscious of the high expectations of the Bolivians and corporate social responsibility. They work with the local communities contributing to the socioeconomic development of the region. They have donated medical equipments worth 300,000 dollars to local hospitals and ambulances to villages. They are building roads and renovating public plazas and schools. Jindal has started a vocational training centre in Puerto Suarez to train the Bolivians. This week they are leading a campaign to plant trees in collaboration with local schools and NGOs as part of their commitment to preservation of environment. Naveen Jindal is literally raising the Bolivian flag, as he has done with Indian flags in India. He has put up a huge Bolivian flag on a 100 feet tall steel pole in Puerto Suarez which can be seen even from across the border in Brazil. He is going to put up another one in La Paz too. Jindal banners are all over the roadsides proclaiming their commitment to partner with Bolivia to make steel.

Vikrant Gujral, the President of Jindal Bolivia in front of his office in Puerto Suarez, the nearest town 40 km from Mutun: 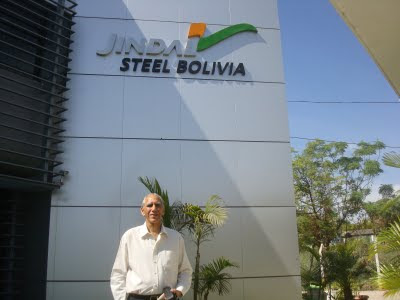 The mine is working 24 hours and seven days a week. Picture of the work in the mine below: 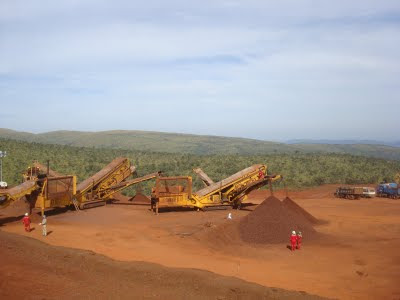 Jindal has already produced 400,000 tons of iron ore which are waiting for exports. The stocks can be seen in the picture below: 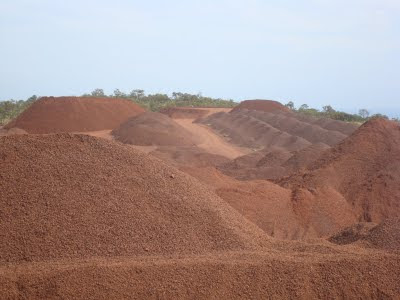 Puerto Suarez where Jindal has their operational headquarters is a quiet town with a population of 25,000 people, who are all excited about the transformation in their lives to be brought about by the steel project. The owner of a local restaurant has got a large and lucrative contract to feed the people at work in the mine and had to abandon his restaurant in the town. Traffic in the small and charming airport of Puerto Suarez has increased. This should be the most civilised airport in the world. The passengers can walk from the check in counter to the plane without the botheration of X Rays, metal detectors, baggage check and groping. The airline operating from Puerto Suarez is called as TAM... Not the Brazilian one. It is Transport Aereo Militar. Their punctuality and services are better than the Brazilian TAM.

While the Jindal is proceeding with the project seriously, they face some challenges. These are technological, logistic, infrastructural, administrative and political challenges too. But the Indian team, with its innovative skills is overcoming them. The most formidable challenge is, of course, political. There are some vested interests who do not want to see the success of this project and progress of Bolivia. These were the same forces who had ruthlessly kept the indigenous people of Bolivia backward and excluded them from political power and economic opportunities for the last several centuries. They spread misinformation about the Jindal project and poison the minds of policy makers and put obstacles at every possible opportunity. But these vested interests underestimate Naveen Jindal who himself is a politician and a champion shooter. And then there is Vikrant Gujral, the Iron Man who has dealt with mafias and politicians in the interior of India and succeeded in making the public sector steel plants profitable. He is optimistic that the dark forces cannot stop the project which is so important for the Bolivian economy and society. Gujral faced his first challenge while bidding for the project. He had difficulty in breathing when he went for the first time to meet the Bolivian authorities at La Paz which is at an altitude of 3100 metres. He was aware that Bolivian football teams had beaten Brazil and Argentina using their altitude advantage. In the world cup qualifying match on 1 April 2009 Bolivia beat Argentina 6-1, the worst defeat Argentina had suffered. The Bolivians trounced the Brazilians 2-1 on 11 October 2009.

Vikrant Gujral was given the following advice to survive the altitude problem in La Paz:

Gujral followed this advice, survived the altitude and succeeded in winning the contract ...and now he has decided to continue to sleep alone till he completes the project......

Posted by viswanathan at 3:51 PM